Dozens of baby snakes relocated out of construction zone 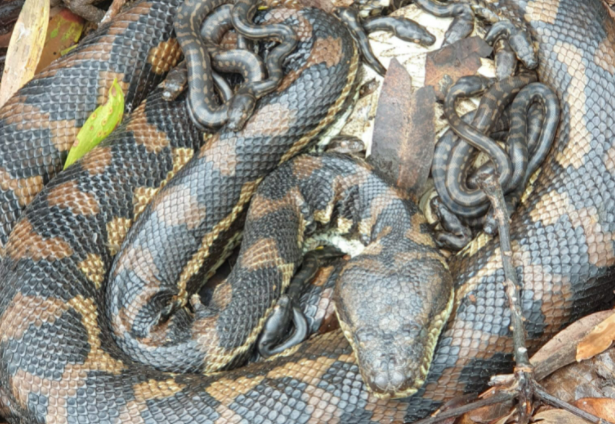 Snake catchers have watched as two dozen baby snakes emerged from their eggs, after crews were called to remove a large carpet python from outside a Nambour home.

The owners called Sunshine Coast Snake Catchers 24/7 to remove the snake on Saturday, after spotting it sitting on a clutch of eggs in their backyard, which was about to become a construction zone.

"We didn't realise the eggs were hatching at the time, so we lifted up a bit of nettle and there she was - and I think there were about four or five babies out at that stage," says snake catcher Heather McMurray.

"We brought them home and hatched the rest out.

Heather says they have since relocated the mum and her babies to nearby bushland together, but that they won't stay as a family unit.

"We took them out pretty close to where they were caught because they are reasonably territorially.

"Whilst they're not maternal - mum will go her way, babies will go their way - it's just nice to keep them all in the same area."