NSW premier teases easing of restrictions - NSW Premier Gladys Berejiklian has promised eased COVID-19 restrictions in a week's time, if all goes well, after the community heeded her call to dri ...
Trump pardons ex-aide Bannon, but not self - US President Donald Trump granted clemency to former White House aide Steve Bannon as part of a wave of pardons and commutations issued in his final h ...
Listeria find sparks SA warning on ham - Listeria has been found in ham produced in South Australia, prompting a warning to consumers.
Workers in demand as home building blooms - Construction workers are in hot demand as home building blooms, helped by low interest rates and government stimulus programs.
Kallangur landscaper fined $21,000 - A landscaper based in Kallangur, south of the Sunshine Coast has been ordered to pay $21,000 for not performing work he was paid to do. Luke Wi ...
Heatwave for NSW ahead of Australia Day - Parts of NSW are in for a sweltering weekend ahead of Australia Day, with temperatures expected to reach 15 degrees above average in some places.
Open player accused of feeding hotel mouse - Kazakhstan tennis player Yulia Putintseva has been bizarrely accused of feeding the mice which are running around her quarantine hotel room.
Which jobs are tipped to prosper in 2021? - Workers looking for job security in 2021 should consider Australia's "largest and fastest growing" industry, broadly known as the care econo ...
Rare parrot breeding record in Tasmania - A critically endangered migratory parrot is breeding in Tasmania in record numbers, giving biologists renewed hope for the species' survival.
Rhino Iguana at Australia Zoo sets world record - A 41-year-old Rhinoceros Iguana at Australia Zoo has secured a Guinness World Record as the oldest of his species. The reptile, called Rhino, ... 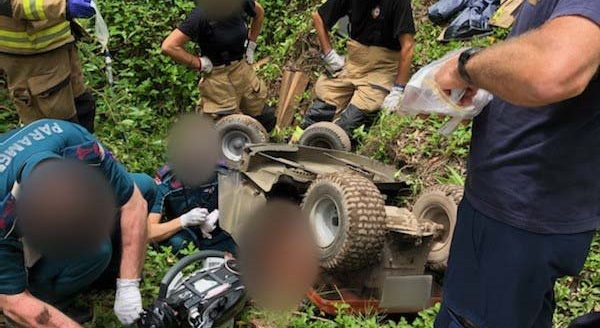 An elderly man has been badly hurt, after the ride-on, lawn mower he was on rolled down a ditch in the Gympie region.

The Sunshine Coast RACQ LifeFlight Rescue helicopter was called to a private property just before midday.

It's believed the man in his 70s, had been operating a ride-on mower when he lost control and rolled down an embankment.

The mower came to rest upside down, pinning the man beneath it.

A neighbour reportedly raised the alarm after coming across the accident site some time later.

The patient was freed by emergency crews and treated for serious lower body injuries, before being flown to Sunshine Coast University Hospital in a serious but stable condition.